Today we were invited to attend the opening day of Europe’s first hybrid roller coaster. RMC’s latest coaster was going to be unveiled to the public: We’re talking about Untamed at Walibi Holland in the Netherlands. 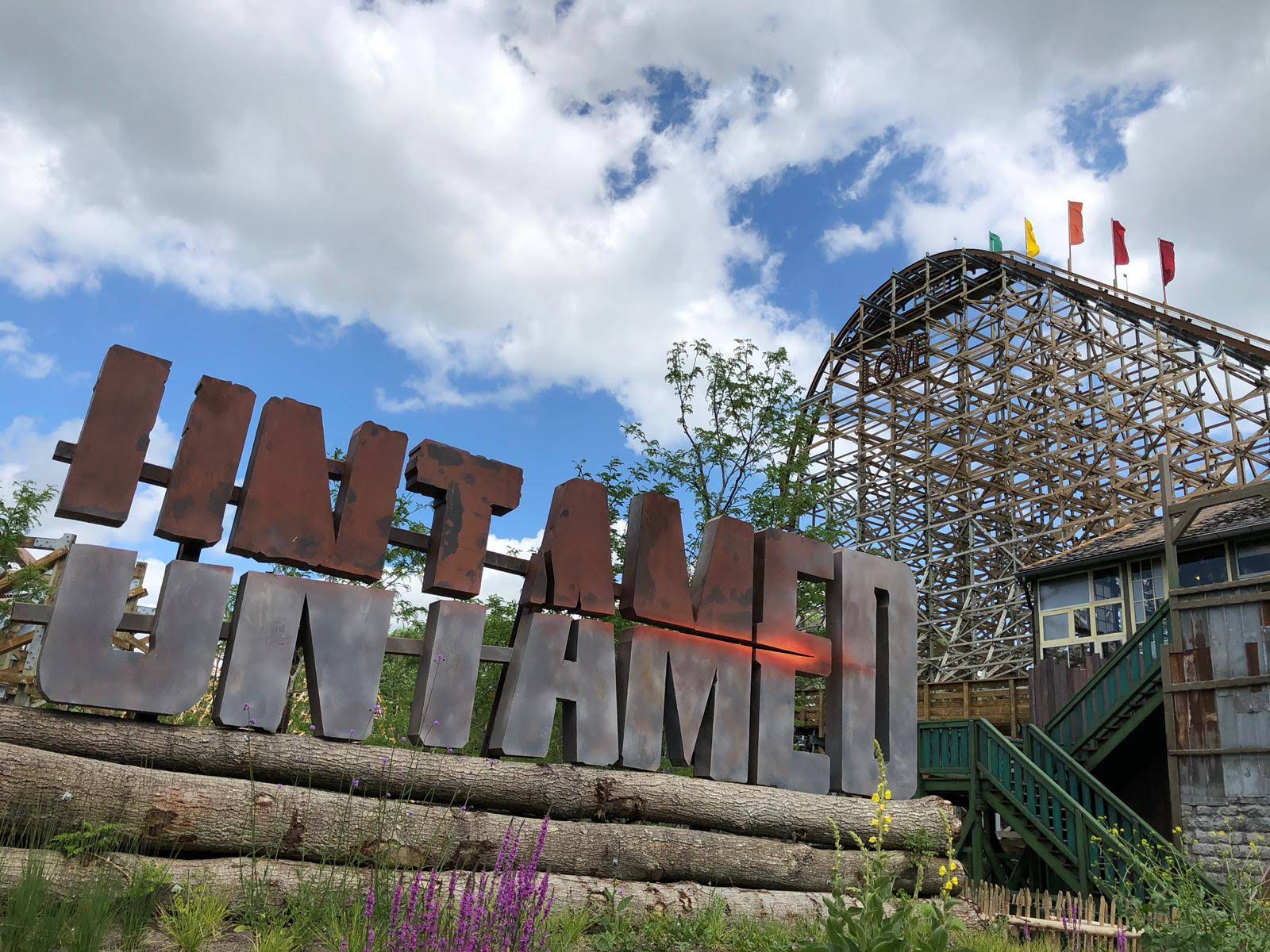 The old woodie Robin Hood was half demolished, and on its skeleton a new hybrid coaster by RMC has now risen. The area in the park its in, the old Sherwood Forest area has now been renamed and re-themed to become “Wilderness”. 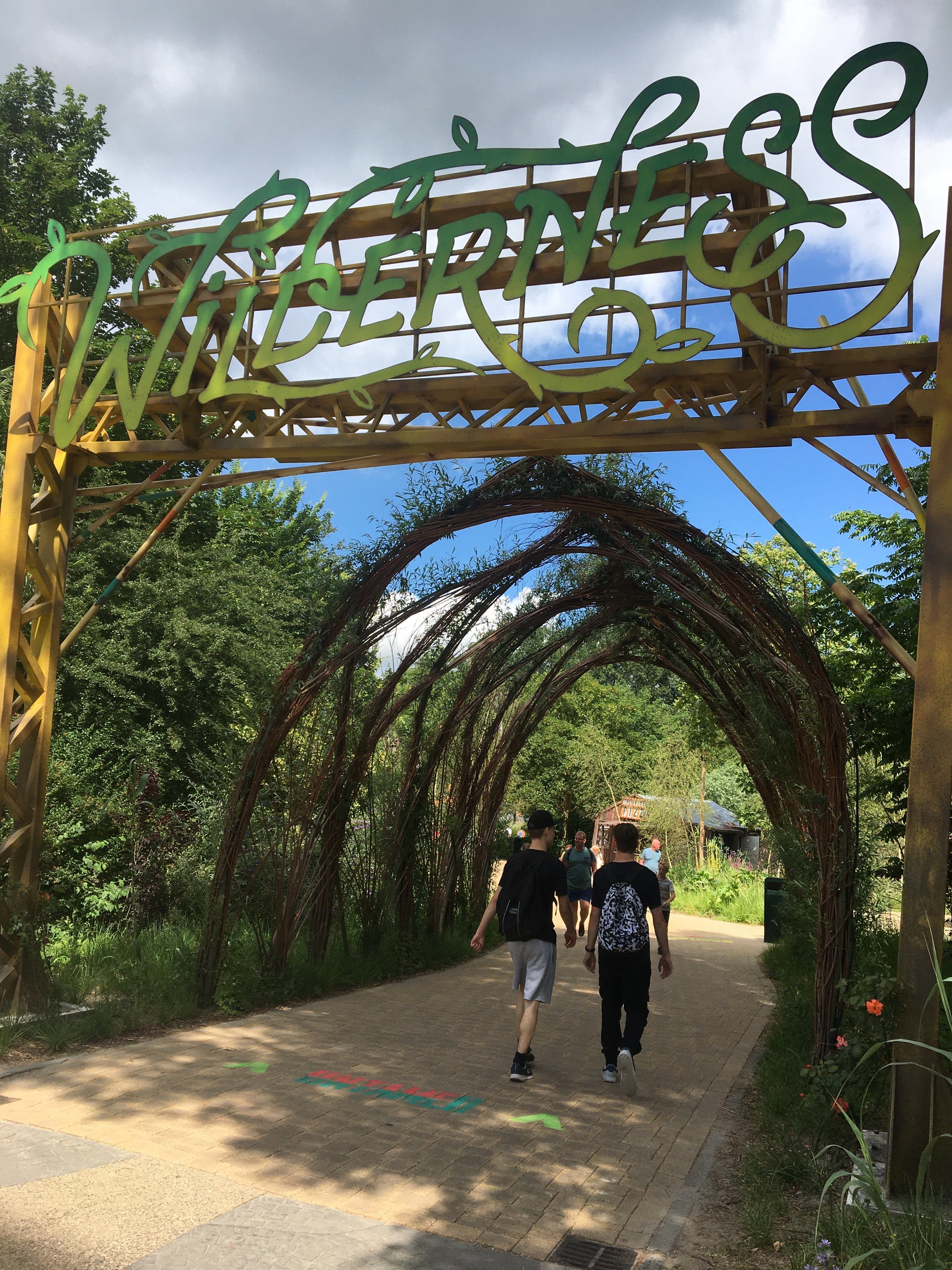 After a couple of short speeches by Walibi director Mascha van Till, Dominique Marcel (CEO of the Compagnie des Alpes who own Walibi) and Rocky Mountain founder Fred Grubb, they took to the station to take the first official ride on Untamed. Seeing it go through the track for the first time, with lots of fireworks accompanying them as they went through, was in 1 word: amazing.

Untamed looks beautiful and crazy, and the first time seeing it made us wonder how the train would even be able to get through these crazy twists and turns. 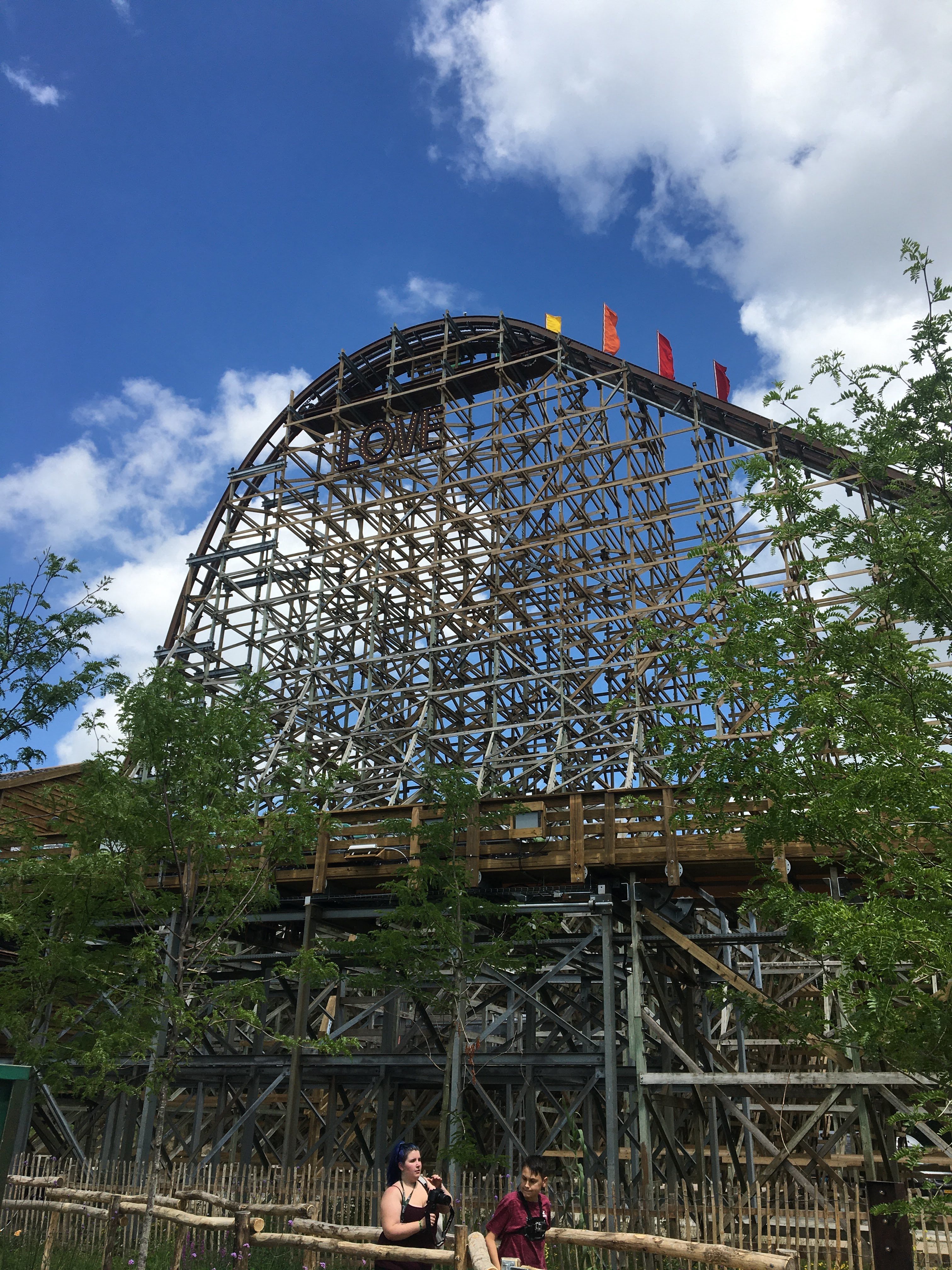 Not long after the first train departed the station, the gates were open for us, and we strolled through the queue which is situated in the middle of the coaster layout. The wilderness has been planted, and looks like it will grow to become a really green and pretty landscape. We pass under an arch which had one of the old Robin Hood wooden roller coaster train carts on it. We then pass through a small forest of old Robin Hood tracks which is truly a pretty homage to a once great wooden roller coaster (but became pretty shaky over recent years).

From the queue more and more twists, rolls and other features could be feasted on with our eyes as  the new trains thundered through them. This gets us excited to board! 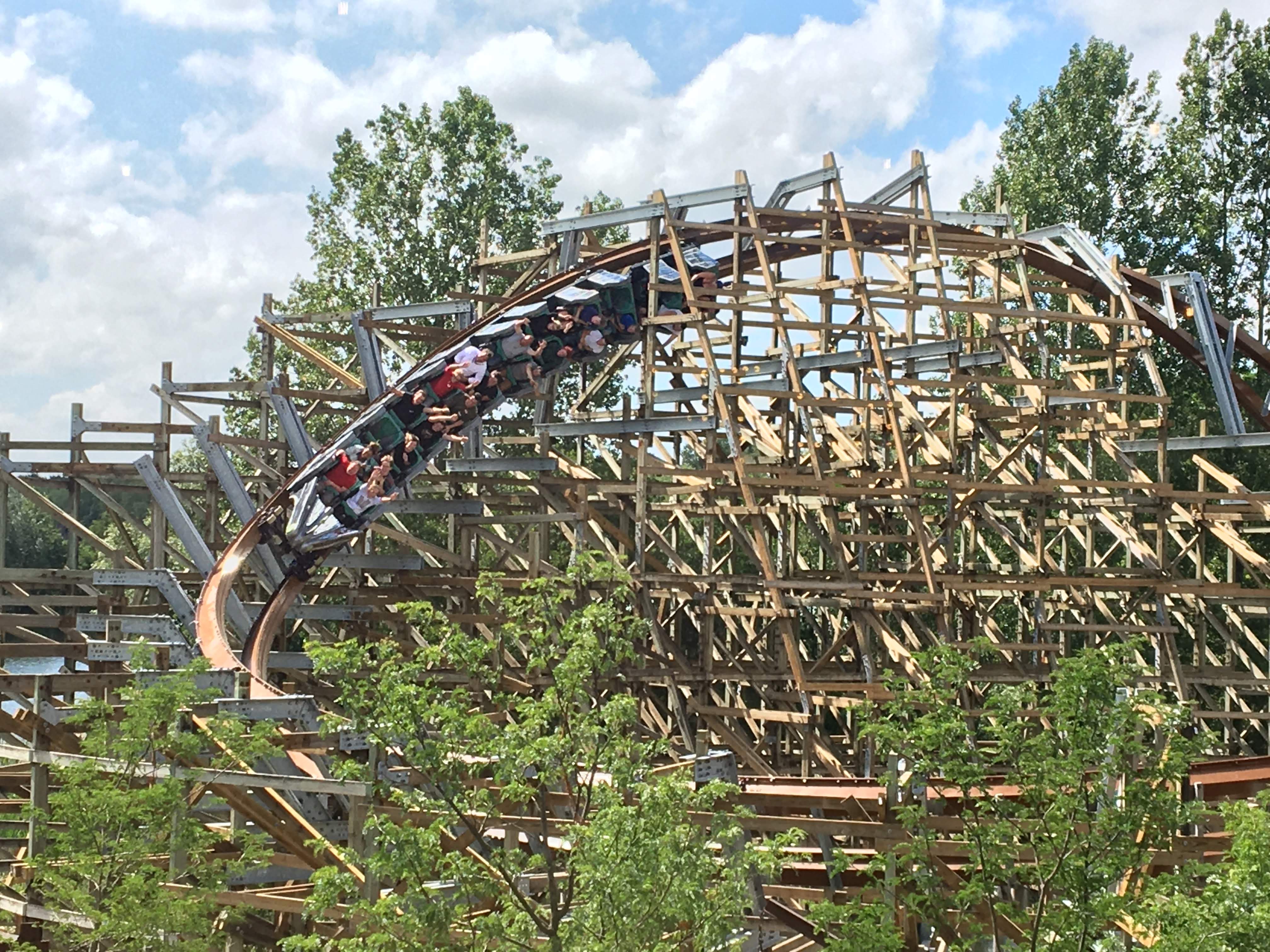 The station now has an added waterfall feature, and inside is decorated with wild green plants, bushes, mirrors and old lamps (eh). Soon after, we boarded and took our back row seat.

Rolling out of the station, we take a 45 degree outside banked corner into the lift hill. With a pretty view of flat Netherlands behind it we slowly go up, sped up a bit at the end of the lift hill, to then race down the insane 80 degree downdrop. It looked like the track was gonna hit the ground (we’re almost flat on the ground right now) and seeing that micro bunny hop after the drop makes us brace ourself as we’re going at it at 92 km/hour. It’s after we are almost launched out of our seats because of the airtime, that we’re flying into the world’s first (wait for it) “Double Inverting 270 Degree Corner Stall”. An absolutely insane inversion that makes you question which way you’re going. The ride does not give you 1 second of rest as it races and thunders through the next inversions and elements. You catch a glimpse of the station (guessing we’re at the front of the ride again) only to shoot back into multiple airtime hills, overbooks and more. This ride doesn’t stop. It keeps. on. giving. It tries to pull you out of your seat so many times we lost count. At the final part we race under multiple “head choppers”, which made us pull our arms down and after one more airtime hill we hit the brake (still at a high speed I might add!). We’ve been told by Mascha from Walibi that they actually didn’t order these head chopper elements, but RMC installed them anyway. What a great surprise.

Disoriented, crying because of the speed, but seriously amazed at how a ride can be so fast, and yet so smooth we slowly roll back into the station. Well done RMC. Well done Walibi. This is truly an amazing new roller coaster, and I might add that this has put megacoaster Goliath in their park on the 2nd place.Untamed is an amazing ride. It’s up there on this reporter’s top 10 list. Congratulations Walibi on Europe’s first hybrid coaster – let’s hope we’ll get a lot more on this continent! 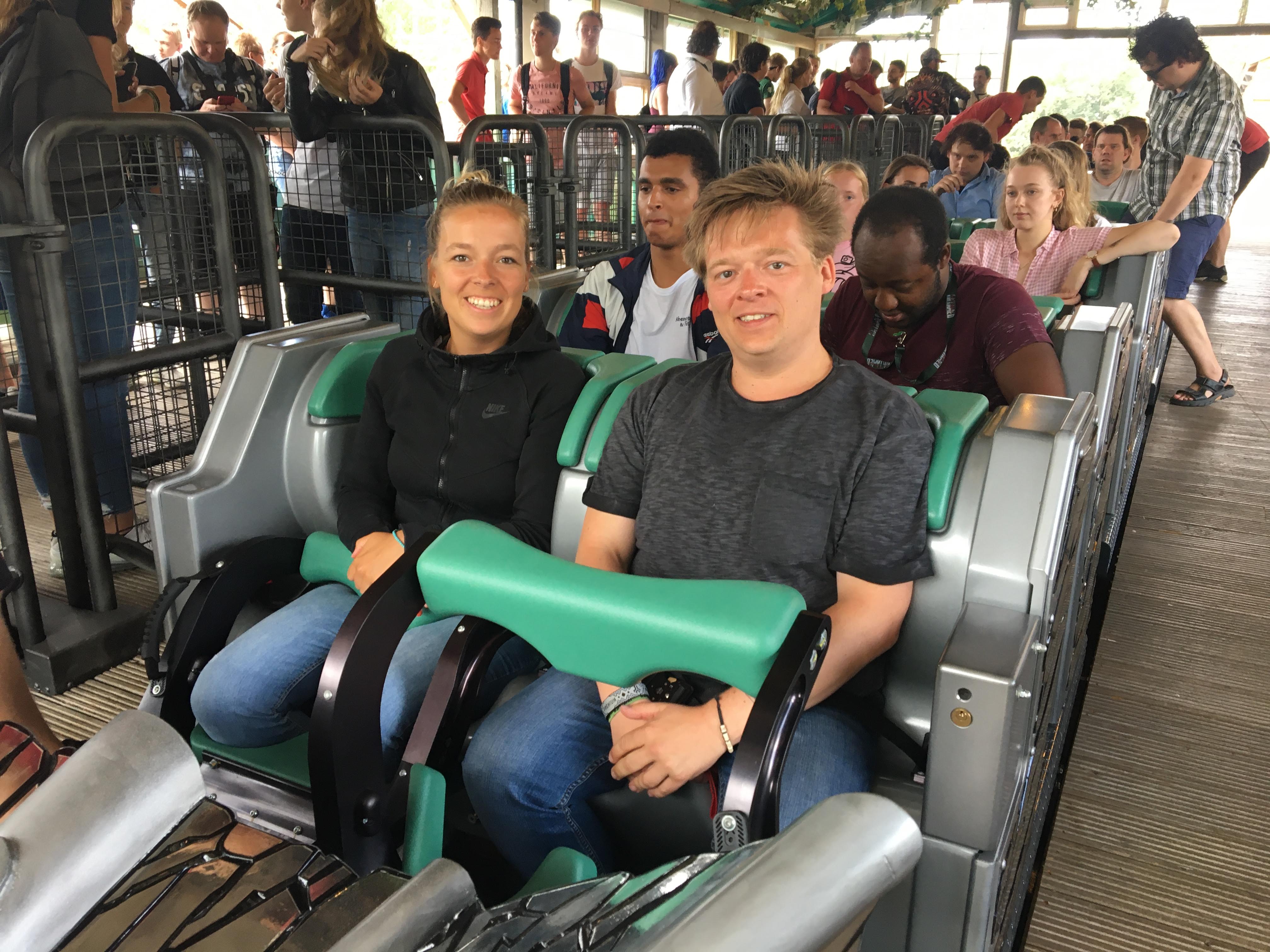